Designated in 1983, it was the first federally recognized wine-growing region in the Pacific Northwest. It also is the largest sub-appellation of the Columbia Valley, both in total size and wine-grape acreage.

Yakima Valley has an arid continental climate, with annual average precipitation at just 8 inches. Irrigation is therefore required to cultivate vinifera grapes, as is true of all growing regions in eastern Washington. Moderate to deep silt-loam is layered over gravel or directly onto basalt bedrock. This foundation creates well-drained soils that are ideal for viticulture.

Located on the outskirts of Grandview, this mid-valley, cooler site is a great asset to our portfolio of vineyards. And it's managed by one of the most affable, dedicated growers in the state. Dick Boushey is driven to take his fruit to the highest levels in Washington, and he's succeeding. You'll often find his grapes in the highest acclaimed wines from the appellation.

And we love Dick's Syrahs! Our La Serenne has been one of the most consistently awarded and acclaimed wine we make, and it is 100% from Dick's vineyard. We have rows designated to our Syrah in a spot where the soils thin out and don't produce a large crop. The grapes are small, thick skinned and loaded with flavor.

Olsen Vineyards are located in the East end of the Yakima Valley from north of Prosser to north of Benton City. The vineyards are planted on several different sites with a wide variety of slopes, aspects, and elevations. The first vines were planted in 1980 and the youngest will be planted in 2005. Varieties grown include: Chardonnay, Pinot Gris, Riesling, Sauvignon Blanc, Chenin Blanc, Cabernet Sauvignon, Cabernet Franc, Merlot, Pinot Noir, Syrah, Mourvedre, Cinsaut, Petit Verdot, Grenache, and Malbec.

One of the oldest and most respected in the state. Red Willow Vineyard reflects the learning and experience of Mike Sauer's decades in the Yakima Valley.

Made famous by a series of stunning wines made from the Red Willow by David Lake MW, winemaker at Columbia Winery, it is the farthest west and highest altitude vineyard in the Yakima Valley. Due to it's higher elevation, 1200-1300 feet, the area was above the water level of the last Ice Age floods so the soils are more ancient and weaker than many younger soils in the Columbia Valley. Vines struggle here, but they are tended by one of the most dedicated farming families in Washington. We have designated specific rows of Cabernet Sauvignon (1973 and 1990 plantings), Syrah (1986 planting, the oldest in Washington), and Merlot to Betz Family.

In the end, all these growers are our friends and partners. We are indebted to them for helping us bring pleasure to your table. 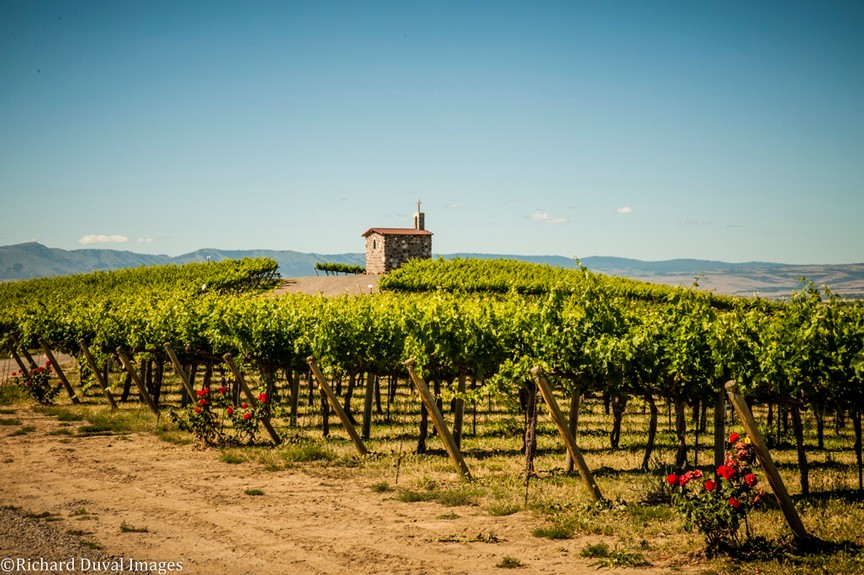 Snipes Mountain was named after cattle king Ben Snipes, one of the first settlers of the Yakima Valley. In the 1850's he located his vast cattle business headquarters on the south side of Snipes Mountain, the highest point in the Valley, providing a panoramic view of the Yakima Valley and his vast herds of cattle. The mountain also provided a little more protection from the elements of Mother Nature than the rest of the valley.

In 1917 William B. Bridgman, two-time mayor of Sunnyside and author of many of the Yakima Valley's irrigation laws, planted vinifera wine grapes on Snipes Mountain and, earlier, had planted table grapes on Harrison Hill, an extension of Snipes Mountain. Bridgman anticipated the eventual increase in wine grape demand in spite of prohibition, continued to plant more, and in 1934 opened Upland Winery, the first winery in eastern Washington. Due to financial constraints, he was forced to sell the winery in 1960 and in 1972 it was closed. Bridgman's vineyards and wine production influenced Dr. Walter Clore, often referred to as the "Father of Washington Wine". Dr. Clore was essential to the development of the wine industry to its the current state.

In 1972 [Todd's] grandfather, Alfred Newhouse, bought the land and vineyards that were once known as Upland Vineyards. Over the following decades...Steve Newhouse, gradually expanded their holdings on both Snipes Mountain and Harrison Hill. Today the Alfred Newhouse family farms cherries, apricots, nectarines, peaches, prunes, pears, apples, juice grapes, table grapes, and of course wine grapes. The farm, once again called Upland VIneyards, is approximately 1000 acres with more than 400 acres of wine grapes which are grown in some of the most unique soils in the world. Because of these unique Snipes Mountain growing conditions, in 2009 the TTB (federal government) designated Snipes Mountain as a distinct American Viticulture Area (AVA), the tenth AVA in the State of Washington. 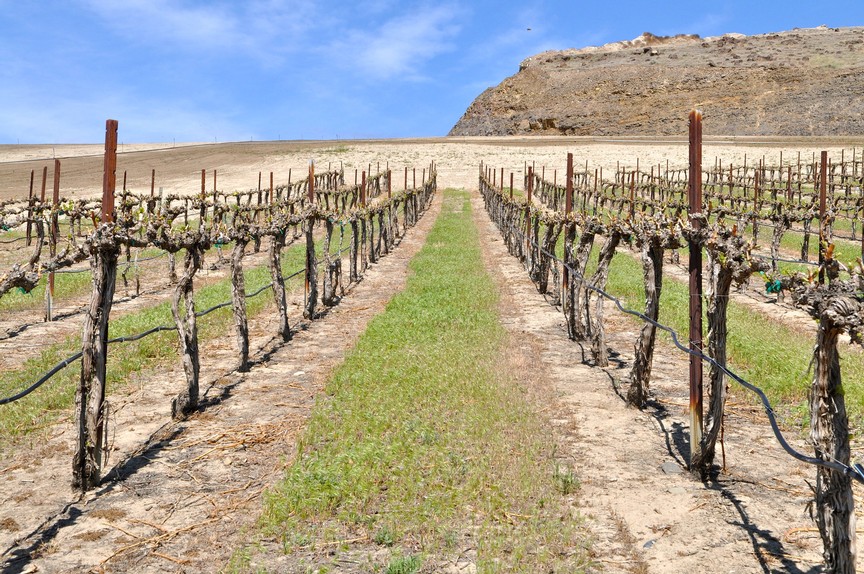 The DuBrul Vineyard is a steep, rocky, south-‐facing hillside in Washington’s Yakima Valley. Hugh and Kathy Shiels planted the vineyard in 1992, have 45 acres under vine, grow six varietals, some in differing soils. We also have 21 acres set aside for a large green belt and tractor roads. We dug a pond in the drought year 2005, which is stocked with bass, bluegill and catfish. We have WHIP (Wildlife Habitat Improvement Program) acreage, and have planted shrubs for IPM (Integrated Pest Management) beneficials. We farm sustainably: the next generation is transitioned into ownership already.

In the geologic context, the ancient Columbia River once flowed over our area. Spring floods carried granitic rocks from Canadian tributaries, mixed with igneous rocks from the Ellensburg formation, to our site. Over eons, tectonic up-‐thrusts occurred, creating the Rattlesnake Hills to the north, the Horse Heavens to the south, and diverting the Columbia to its current S-‐shaped course back eastward to the Wallula Gap.

These up‐thrusts isolated our basalt promontory, so that in time wind-‐blown loess and volcanic ash mixed with the flood-‐borne rocks to create low vigor soils. The southeast triangle is alluvial soil covering layers of coarse-‐grained pyroclastic rocks.

The vineyard sits on a series of gentle, southern-facing slopes at elevations from 1320 to 1460 ft. The vineyard is located above the irrigated portion of the Yakima Valley and is surrounded by dry land shrub steppe. The vineyard has a unique micro climate, perfect for growing and maturing wine grapes.

Betz Family Winery is a Private Member Mailing List. Our members are offered our limited release wines based on their purchase history and how long they have been on the list.  We invite you to become a member of our family.  As soon as you sign up you will have access to our current release.  WELCOME TO OUR FAMILY